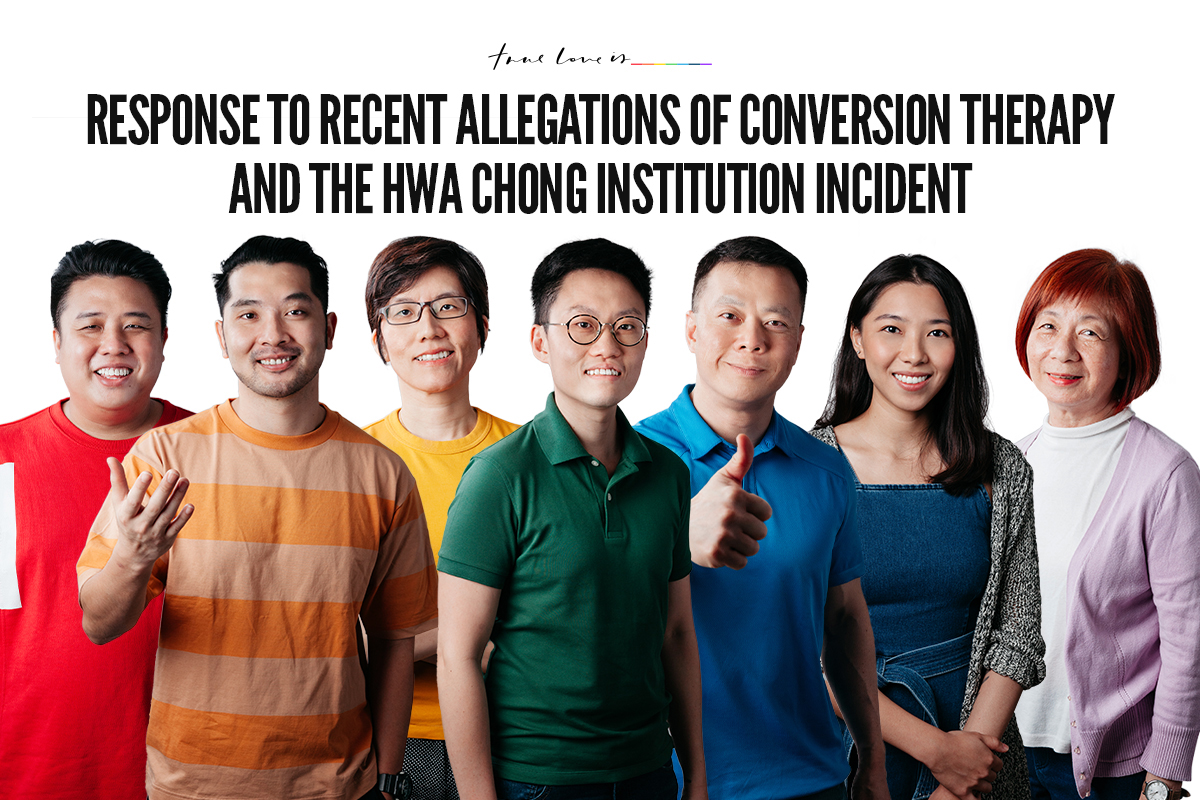 Posted at 15:49h in Articles by truelove.is admin
0 Likes
Share

We have been informed that on 13 July 2022, one of our Truelove.is (TLi) testimony stories was shown to Secondary Four students in Hwa Chong Institution during an assembly talk. Prior to various reports about the incident, we were unaware that our video was shown. Since then, there have been various allegations against our ministry.

TLi is a safe space for Christians to know more about LGBTQ issues and to pursue God faithfully. Some in our ministry are Christians with same-sex attraction but have decided for themselves not to act on their same-sex attraction. We are deeply concerned about these allegations and would like to address them in this statement.

Certain commentators about this incident were quick to allege that TLi does “conversion therapy”. We would like to address this misinformation.

None of our videos condone or promote “conversion therapy”. The video that was shown during the assembly can be found here. This is a Christian testimony of hope. It tells of how a person who experiences same-sex attraction found wholeness and fulfilment in God.

Contrary to the allegations that TLi encourages people to “suppress their desires”, this video which features Shaun’s story, specifically mentions that suppression and embracing of same-sex desires “did not seem to be working”. Shaun then goes on to share about how God revealed to him that, amongst other positive attributes, he is “complete, not lacking”, and that he is who God says he is.

TLi is committed to being a safe space for Christians who choose to pursue God faithfully. The primary goal of this pursuit is not orientation change, but to build a living relationship with a loving God and to experience His holy, life-giving ways. We believe that every person’s fullest potential and fulfilment is found in God Himself. The appetites of the human heart are ultimately only satisfied in His love for us.

We value every person as wonderfully made in the Image of God. It is on this basis that we condemn all forms of coercive, manipulative and abusive practices guised in the name of ‘therapy’ with the goal of changing a person’s sexual orientation.

We are committed to serving those who are seeking answers from a Biblical Christian view, including those who find themselves weary or empty after embracing their same-sex desires.

In Christ, there is hope for everyone who trusts in Him and His Word. TLi as a ministry will stay faithful to this positive biblical message of hope.

We have previously put up a statement in response to Heckin’ Unicorn, to both address the false allegations and to extend an invitation for a private meeting to discuss differences and/or understand objections.

It is unfortunate that to date, Heckin’ Unicorn has not been willing to engage in meaningful conversations with us. He has yet to take up the invitation, censors comments from members of our community on his post and continues to make unsubstantiated accusations against us. We like to reiterate the invitation to the founder of Heckin’ Unicorn to a private meeting to understand one another better.

We have also written a response to Singapore Psychological Society’s (SPS) denouncing of “conversion therapy” in favour of an “affirmation-only” approach to counsel those trying to make sense of their sexuality and gender identity.

In this piece, we re-iterated that “TLi is not out to change anyone’s sexual orientation. We also condemn all forms of coercive, manipulative and abusive practices guised in the name of ‘therapy’ with the goal of changing a person’s sexual orientation.” We even encouraged the SPS to dialogue with various religious groups to better understand how religious groups can help voluntary individuals struggling with LGBTQ issues without “conversion therapy”.

For people who have been wondering or repeatedly accusing TLi of conducting or promoting “conversion therapy”, we recommend reading both of the above-mentioned statements.

The post by Heckin’ Unicorn makes a serious allegation that TLi is “a known perpetrator of conversion therapy practices” and that harmful acts are committed on “LGBTQ individuals”.

Such allegations are not only defamatory towards our ministry, it also affects the reputations of other churches who have been supportive of TLi (TLi has partnered more than 100 churches in Singapore).

Left unaddressed, these allegations can lead to feelings of enmity, hatred or ill will between Christians and those who experience same-sex attraction. There may also be the creation of distrust between religious leaders and their members who are misled by the deliberately perpetuated falsehoods.

These could contribute to disharmony in our society as we seek to find the best way forward on sensitive issues regarding society’s overall well-being, religion and identity.

Beyond the damage that such false accusations have done to our ministry, these allegations are also extremely hurtful to our story sharers.

Our story sharers are micro-minorities who often find their life stories silenced by many. Despite the potential loss of social capital, privacy and other personal costs, our story sharers have exhibited courage that few have to share about their lived experiences in order to bring hope to others who face similar struggles.

In a special report on our website titled “WeExist”, our story sharers made it clear that: “We did not go through conversion therapy. We were not brainwashed. Don’t cancel or censor our stories with these false assumptions or accusations.”.

We respect that not everyone agrees with or wants the Biblical Christian view and testimonies concerning a person’s quest to find answers to their experience with LGBTQ issues. Yet for the sake of those who do, we ask that we respect their lived experiences and honest sharings.

True inclusivity would be to accept the Ex-LGBTQ Community among us and hear their stories.

Whether we are followers of Christ or not, may we create a safe environment for them. They exist. They matter. They belong in our society. They deserve to be respected and heard. No one should be bullied for their views or lived experiences.