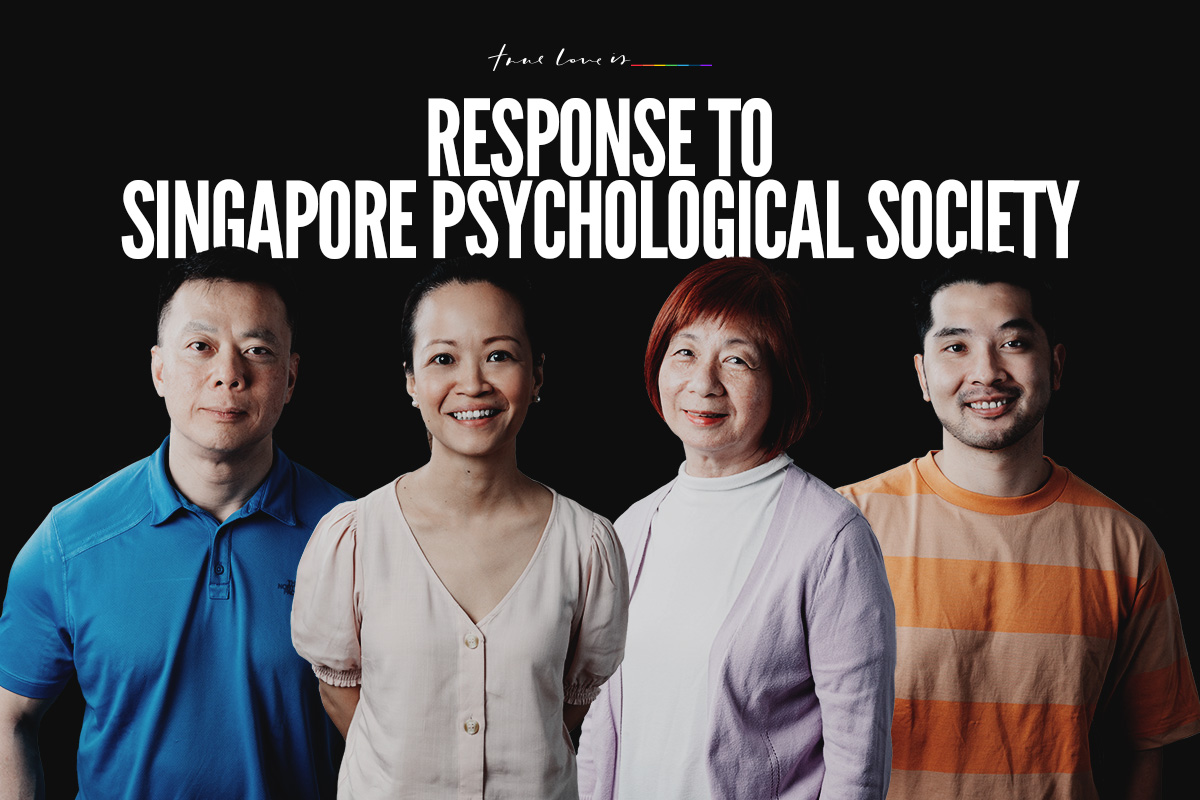 Posted at 07:55h in Articles by truelove.is admin
0 Likes
Share

On 30 Jun 2021, the Singapore Psychological Society (SPS) denounced ‘conversion therapy’ on its social media platforms in support of Pride Month. A Yahoo News reporter had reached out to us on 1 Jul close to noon for comments but we were disappointed that the article was published later in that evening just before we were going to respond. We then took some more time to elaborate on our points and here is our response.

Truelove.is (TLi) is a safe space for Christians to know more about LGBTQ issues and to pursue God faithfully. Some of us are Christians with same-sex attraction but have decided for ourselves not to act on our same-sex attraction. We are deeply concerned about the statement released by SPS as an ideological/political advocacy coming from a professional body is troubling. Let us explain why.

We have previously written a response to Heckin’ Unicorn’s stories of “conversion therapy” and stated clearly that TLi is not out to change anyone’s sexual orientation. We also condemn all forms of coercive, manipulative and abusive practices guised in the name of ‘therapy’ with the goal of changing a person’s sexual orientation.

However, as a psychological association, SPS seems to be unfairly painting all forms of religious help for people struggling with same-sex attraction or gender identity issues to be ‘practicing conversion therapy’. This could not be further from the truth. We would like to encourage the SPS to dialogue with various religious groups and better understand how religious groups can help voluntary individuals struggling with LGBTQ issues in a consent-based, ‘non-affirming’ way without ‘conversion therapy’.

Additionally, Yahoo News seems to have snuck a broader definition of ‘conversion therapy’ into their article, possibly misleading readers to attribute it to SPS. The article’s definition of ‘conversion therapy’ states “Conversion therapy might be performed by mental health professionals, religious practitioners or the community and family members. It seeks to change a person’s sexual orientation or gender identity, or to reduce their non-heterosexual sexual attraction or sexual behaviour.” The italicised and bolded portion was not in the SPS statement. It was taken from the recent Straits Times article titled “Canadian MPs pass Bill banning LGBTQ ‘conversion Therapy’”, which screenshot was use by SPS. Even the sponsor of the Bill – Canadian Minister of Justice noted that, if passed, the Bill will make Canada’s criminal laws on conversion therapy the most progressive and comprehensive in the world. By directly pinning such an extreme definition on SPS, Yahoo News may have caused unnecessary misunderstanding against the Society. We hope that Yahoo News can take note about this.

However, a high-profile legal suit in the United Kingdom taken by a detransitioned woman, Keira Bell against the UK’s gender clinic, clearly shows the harm of an ‘affirmation-only’ approach to gender identity issues.

Bell said “I should have been challenged on the proposals or the claims that I was making for myself… And I think that would have made a big difference as well… I was allowed to run with this idea that I had, almost like a fantasy, as a teenager…. and it has affected me in the long run as an adult”. The High Court ruled in her favour, deciding that under-16s were unlikely to be able to give informed consent to what it described as “experimental” treatment, which is sometimes used to pause puberty in children experiencing gender dysphoria”.

Some of us have also personally gone through the ‘affirmation-only’ approach to explore our sexuality and found it to be harmful and not beneficial. We are all more than our feelings, and we know that sometimes our feelings can lead us astray. Being blindly affirmed on our feelings/desires and told that alternatives are impossible does not help us process our thoughts and feelings constructively. You can understand more about this from our stories such as in James Parker’s testimony here.

SPS’s post stated that “research has shown that sexual orientation change efforts are ineffective and harmful…”. It does not go on to explain that there are studies to show how sexual orientation change efforts significantly help people who voluntarily seek help to reduce unwanted same-sex attraction. Such an unqualified statement by SPS communicates an ideological belief that not only should no one be able to seek help and explore their sexuality or gender identity in a ‘non-affirming’ way, but also that it is impossible to experience a change in sexual attraction or identification (sexuality or gender). To insinuate this is both empirically wrong and an attempt to erase stories like ours. We exist.

We also encourage the SPS to, as a professional body, be neutral and truly evidence-based by also sharing the benefits of non-affirming approaches which some LGBT clients may consider.

We are committed to be a safe space for Christians to know more about LGBTQ issues and to pursue God faithfully. The primary goal of this pursuit is not orientation change, but to build a living relationship with a loving God and to experience His holy, life-giving ways. However, if any shifts in desires occur in our story sharers as result of this pursuit, we want to honour their stories by accurately reflecting these authentic lived experiences as well.

As Christians, we believe our primary, authentic self lies in being a beloved child of God. Our desire to pursue God can, and should be, above all other desires – including LGBTQ desires. There are Christians with LGBTQ+ stories who do not see their sexuality or gender identity to be their core self, and instead want to pursue being their authentic self by living a life that is congruent with their deeply-held religious beliefs.

We support the rights of people to seek help from competent professionals and religious leaders of their choice. Sexuality and gender, along with moral values and religious beliefs, are very intimate, personal and sensitive matters. We should respect the freedom of people to voluntarily approach others for assistance and to build relationships as part of their personal development and growth.

We recognise SPS’s desire and aspiration to ‘advance psychology as a science and as a profession in Singapore’. It will be a pity for SPS to lose its focus by venturing into virtue signalling or ideological activism. We also hope that other professional associations can stay focused and faithful to their professional practice, not bowing to the cultural pressures of our time. This will be of great benefit for people who are struggling with LGBTQ issues.